This is the Hero!

The Key That Opens the Future

Daimaou GrenGhost is the villain of the Madan Senki Ryukendo and the leader of the Jamanga Demon Army.

He is Jamanga's "King of Demons" who fought Master Ryukendo long ago and lost enough energy to regress into a green orb-like egg hovering in the eternally black sky of the area where the Jamanga armies reside. Only when enough Minus Energy, brought about by negative human emotions, is collected, can he be revived. Though he was successfully revived, emerging from his egg to evade Ultimate Ryukendo, GrenGhost was in a larval state and attempt to fully mature at the metal factory, but was easily killed by Ultimate Ryukendo. However, GrenGhost's soul survived and absorbed Doctor Worm to create a new human-like body until he possesses enough excess power from Ultimate Ryukendo taping into the Power Spot to rip out of his host and assume his true moth-like form before being destroyed by the Madan Warriors' final attack. 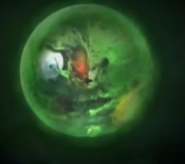 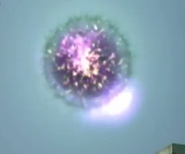 GrenGhost's true form
Add a photo to this gallery
Retrieved from "https://ryukendo.fandom.com/wiki/Daimaou_GrenGhost?oldid=5295"
Community content is available under CC-BY-SA unless otherwise noted.